When we talk about receiving good reviews or positive feedbacks, then this is a fish finder which has gained the highest amount of positive reviews. There is hardly any fish finder in the market which has received such positive feedback from its customers. The Lowrance Hook-7 ﻿Sonar/﻿GPS Mid/High/Downscan Navionics+ Fish finder will offer you the best features at a great value of price. 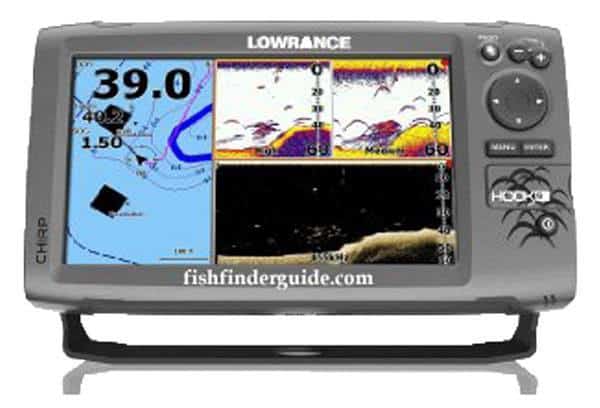 This incredible fish finder has combined the benefits of Chirp sonar and a Down scan sonar system. That means, d﻿﻿ouble sonar systems have been used in this device, which gives you the most clear and competitive view of the under-water area.

Moreover, the Lowrance Hook-7 Sonar has included the function Hybrid Dual imaging, means the power of two technologies. The Broadband sonar with the exclusive Downscan imaging will provide one the best possible view of the underwater environment. It has also the option of Trackback that will allow you to scroll back to the sonar history. Mainly, Lowrance Hook-7 fish finder has combined all the best technologies in one device and which have made this as one of the best products of the m market.

As an Amazon Associate, fishfinderguide.com earn from a qualifying purchases.